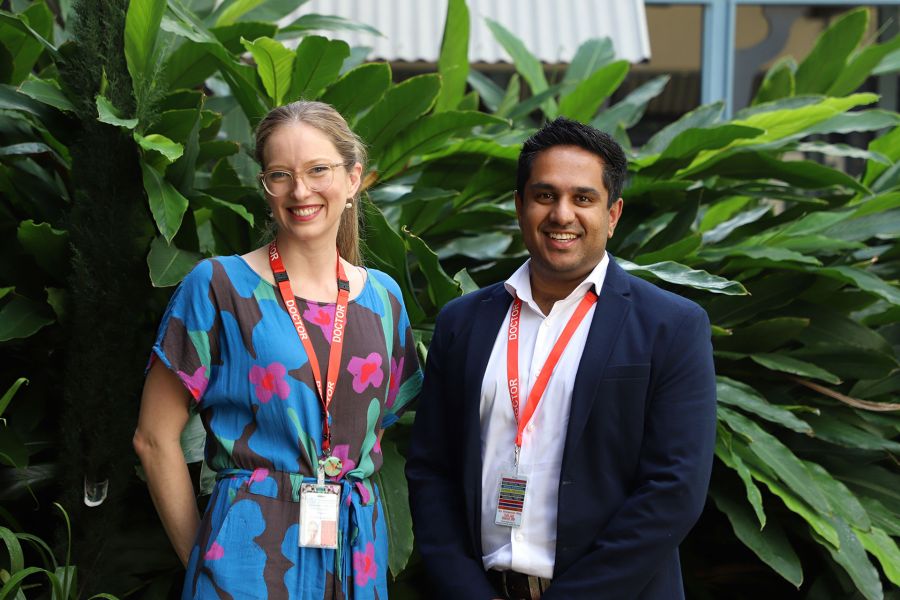 James Cook University graduates Drs Rosh and Courtney Samuel have returned to Townsville with highly specialised paediatric skills that reduce the need for children to travel to Brisbane for treatment.

The 2010 JCU graduates, who undertook several years of their paediatric training at Townsville University Hospital (TUH), are excited to be back and meeting a need in North Queensland. 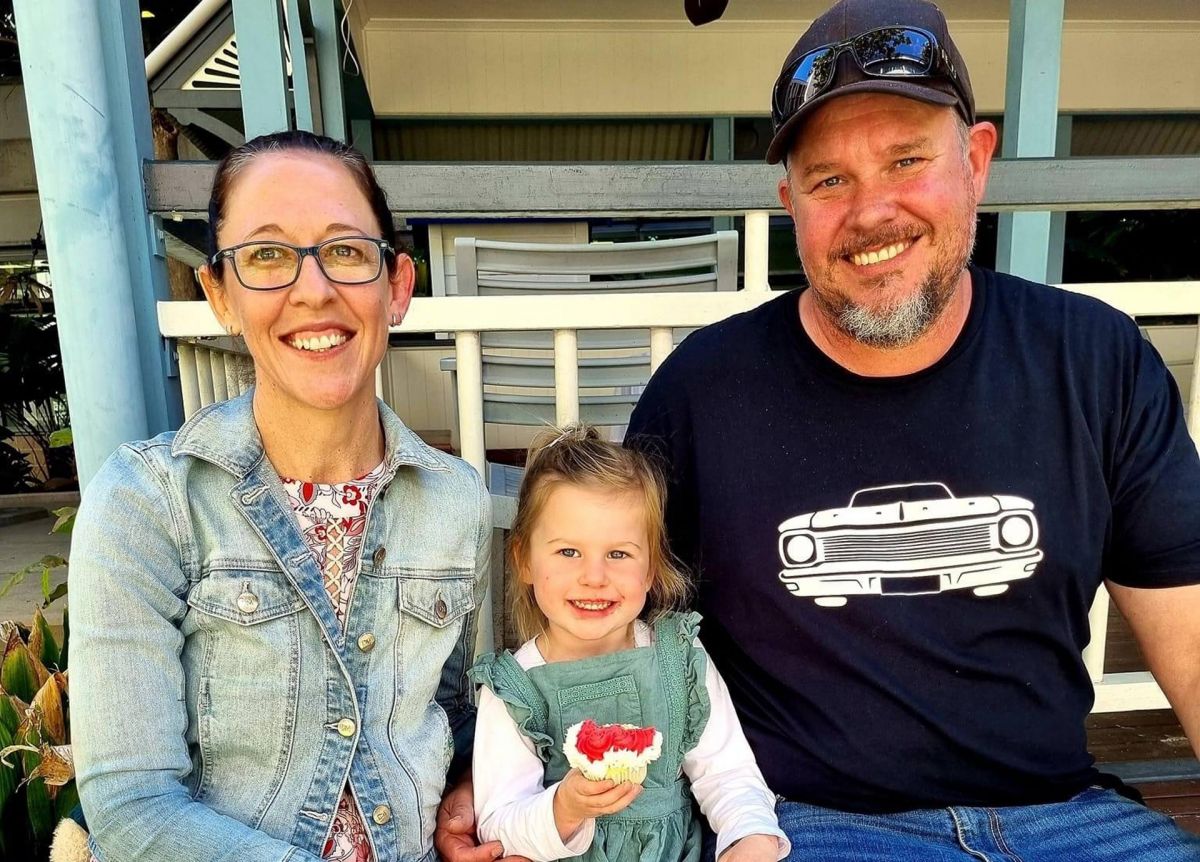 Making a difference to families

Townsville’s paediatric and fetal cardiology service is life changing for children like four-year-old Emily Fearns, who has a congenital heart disease. Emily’s parents, Amanda Stones and Steve Fearns, led the push for a NQ specialist.

“Having a paediatric cardiology specialist locally to support children and their families is amazing,” Amanda says. “When Emily was diagnosed with her heart condition, we spent three months in Brisbane, where we were fortunate to be able to stay with a friend. Now with the specialised care locally, Emily may not have needed to go to Brisbane at all or would have been able to come home after a month.

“When we did return to Townsville, to find out there were so many children with heart conditions in the region and no permanent specialist, on top of the fact that we were told we needed to move to a big city for Emily’s care, really shocked us. We love living in a regional area, and knowing there was a real need for the specialist prompted me to think about how we could change this.”

Amanda started a petition that was tabled in State Parliament. “There were many other families who got on board and got involved with championing this service. The Charity Heart Kids also provided input and support for getting the service,” she says.

“Some children have been waiting a considerable time to be seen by the visiting cardiologist, who came up from Brisbane only every three months. This wait causes so much anxiety for families. For our family, knowing that when Emily needs medical attention, we have the specialist right here, this makes such a difference. Words can’t really describe how good it is. We are very grateful.

“While children with heart conditions will still need to go to Brisbane for surgery, it means they can come home sooner and get their care in Townsville. From our experience, that is so important. Being away from home with a sick child is so stressful. On top of the obvious worries, you are away from your support network.” 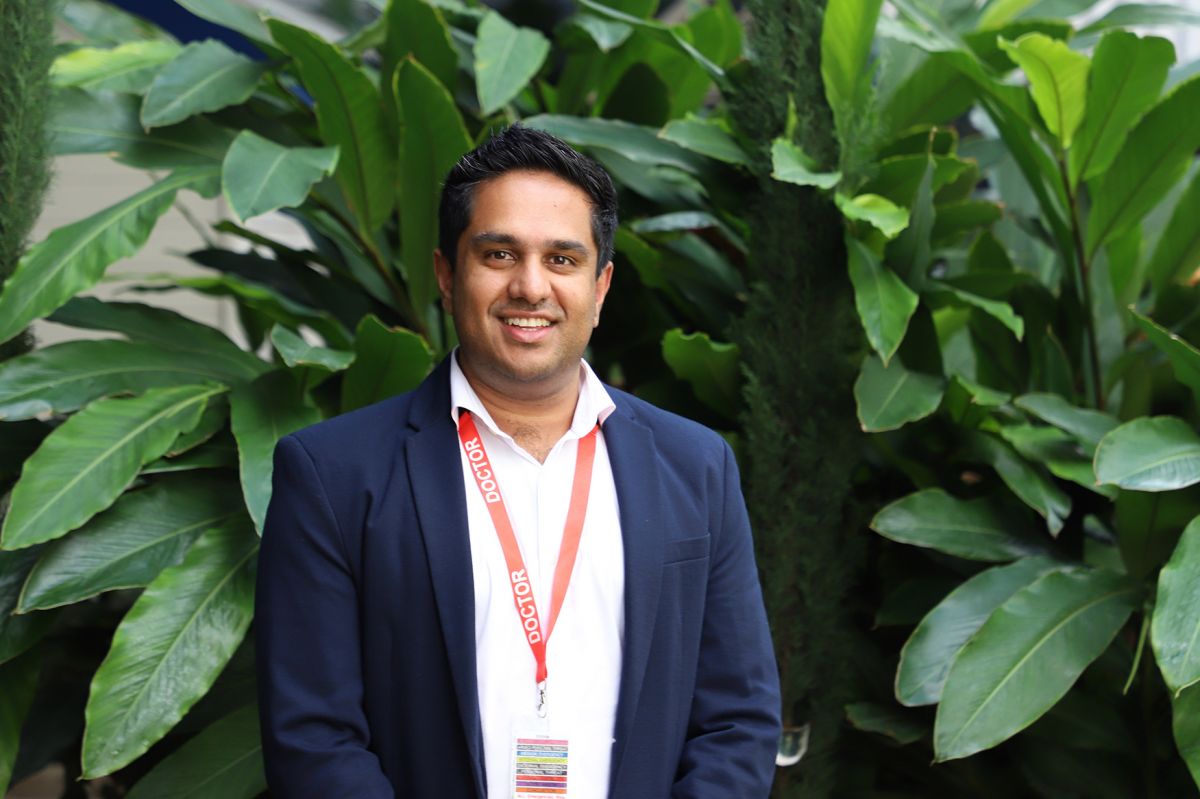 Rosh says while cardiac surgery and interventional procedures will still take place in Brisbane, a lot of the pre- and post-procedural care can take place in Townsville.

“There will hopefully be much less need for families to travel to Brisbane for their paediatric and fetal cardiac care, especially at a time that's so stressful when they're learning that their child or unborn baby has significant heart disease,” he says.

“The paediatric department here worked closely with the Queensland Paediatric Cardiology Service, based at Queensland Children’s Hospital, to make it a hub and spoke type model, which integrates our service very well. We are fortunate to have a multidisciplinary team of full-time professionals. Our team is well supported with a senior cardiac scientist, a clinical nurse consultant (CNC), a rheumatic heart disease CNC, a training registrar and a full-time patient services officer.”

The fetal cardiology component of the service means assessment can now take place in Townsville when a heart issue in an unborn baby is detected by ultrasound.

“We can give a lot of information to families about what the baby’s heart issue is, what they might expect for the future, and we offer a range of management options. We, with families, are then in a much better place to prepare for what’s to come,” Rosh says. “It’s great for delivery planning and avoids the shock of a life-changing diagnosis in the already stressful neonatal period.

“If babies are expected to require intervention in the newborn period, it's safest to plan delivery in Brisbane. But if newborn intervention is not anticipated, mothers can safely deliver here because we have such fantastic maternal-fetal medicine and obstetric teams, a newborn intensive care unit that's experienced in looking after these babies and, now, we can provide post-delivery cardiac assessment to families who were previously travelling to Brisbane or waiting months to receive assessment and counselling with a children’s cardiologist.

“Our service will grow. As it stands, I think there's at least enough work for two paediatric cardiologists and related support staff and we'll certainly be advocating for this sustainable model of care in the near future.” 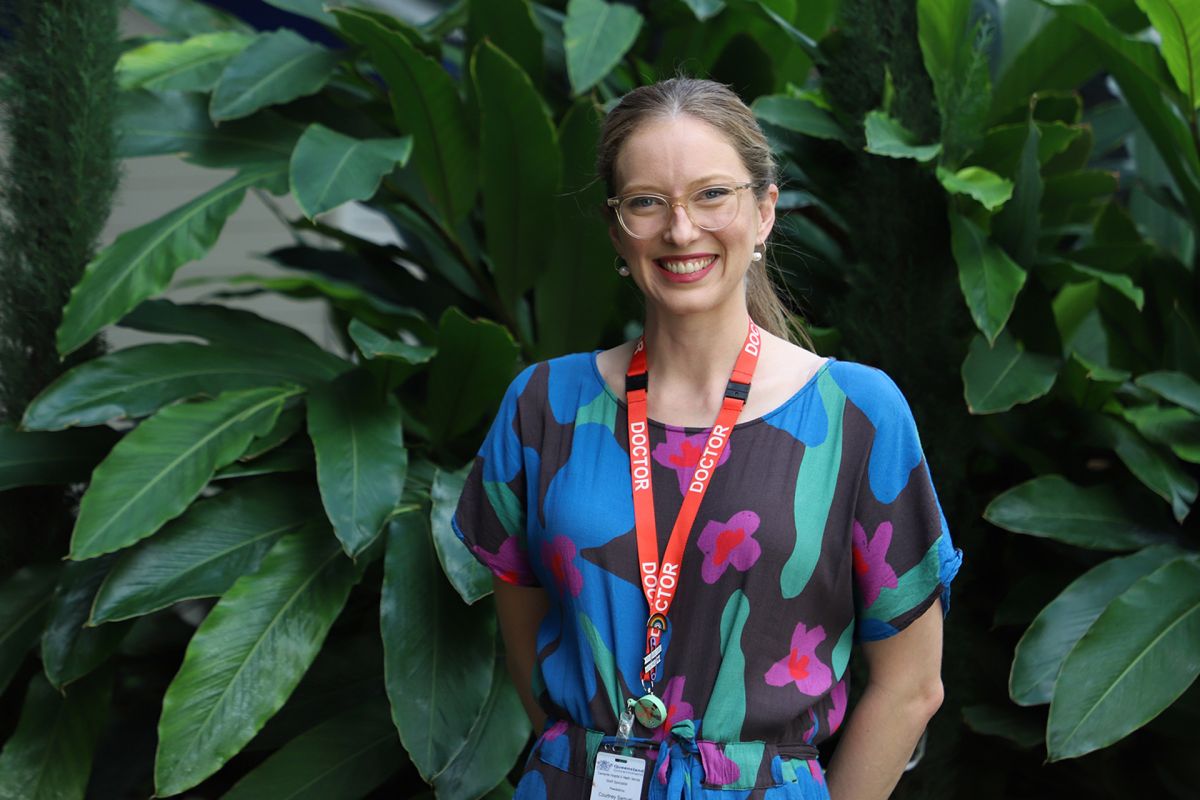 While Townsville Hospital and Health Service does not yet have funding for a paediatric rheumatology service, local doctors have been able to refer to Courtney and she has already performed procedures that would previously have necessitated patient travel to Brisbane.

“Part of the first line treatment for kids who have arthritis is to inject steroids into their joints. We’ve already been able to avoid having to send several children to Brisbane for these procedures by performing them in our day procedure unit and in operating theatres here at TUH.

“With GPs, paediatricians and other specialists knowing there's someone locally, the number of rheumatology referrals has increased even in the few months that we've been here. It won’t take long to demonstrate there's a need for a locally based service.

“In rheumatology, a lot of cases are diagnostic dilemmas. I really enjoy working out what is going on with these complex presentations and can now offer that clinical opinion locally. It’s an incredibly rewarding specialty.  Kids who previously suffered immense pain and limitation are living happy, healthy lives, thanks to advances in the way we treat these conditions and the drugs and therapies available.”

Family, friends and a future

Having moved 15 times in 15 years for their training, the Samuels are happy to be back in Courtney’s hometown after shifting between Townsville, Cairns, Brisbane, the Sunshine Coast, Melbourne, Perth, Vancouver and Edmonton.

“For the most part of our training, Courtney and I were fortunate to secure positions in the same places and only had to do two six-month stints apart,” Rosh says. “We knew Townsville well and had roots here.

"We knew our work here would be meaningful. I can utilise both the paediatric and the fetal cardiac aspects of my training regionally and still be closely linked in with the tertiary service in Brisbane."

"Of course, the fact that we could both work here was another big drawcard. We were very lucky to get consultant jobs in the same place at the same time as that was always going to be the tricky part when we finished.”

The Samuels are parents to a two-year-old son, who loves the outdoors. “We have found Townsville a great place for young families,” Rosh says. “It’s an easy place to live, with a quiet, down-to-earth, picturesque kind of charm.”

Courtney and Rosh have many friends from their JCU medicine cohort who have come back to Townsville as specialists, with young families and at similar points in their careers. They include anaesthetists, paediatricians, orthopaedic surgeons, general practitioners and a haematologist.

“Our colleagues now were our supervisors when we were training here,” Courtney says. “We knew that the paediatric department at TUH was a lovely department. It's a nice mix of highly skilled general and sub-specialist paediatricians and its growth allows us to bring more subspecialty care to the team. We've already seen a lot of old faces from our JCU days, and some our old medical students are now our junior doctors on the team.

"We always liked the idea of coming back to a regional centre. I don't think either of us had planned on doing dual training with a paediatric subspecialty. We found areas of medicine that we are really passionate about, so pursued additional training, and it has meant we are now in a privileged position to serve the community.

“We've moved so much in the last 15 years that we've missed a lot of time with our family and our friends. It's nice to finally be settling down. Certainly, moving back and forth internationally during the pandemic with a toddler was not our favourite thing.”

Rosh, born in Papua New Guinea after his parents moved there from India, grew up in New Zealand and moved to Townsville to attend JCU. “I thought I'd moved to the equator initially,” he jokes. The couple met in their first year when they were assigned to the same tutorial group at JCU. “Seventeen years later, we've ended up back in North Queensland together with our family. That’s kind of cool,” Rosh says.

Courtney says: “Rosh always liked the idea of paediatrics but I thought I wanted to be an obstetrician initially. I then realised that it was the babies that I liked! It's been good in a lot of ways because we share the same experiences and have each other to talk to about that, despite being in quite different fields of paediatrics. Kids keep it pretty simple. They just want to feel better, they bounce back quickly and they’re very resilient. I like that about looking after children.”

Courtney has fond memories of studying medicine at JCU. “We had a wonderful time. We did lots of hands-on clinical placements and worked in rural settings all over Queensland. It really prepared us well. JCU graduates are among the most work ready we see.”

“It's a very thoughtful curriculum. Nothing is tokenistic and there’s a genuine passion for rural, remote and First Nations priorities. There is a forward-thinking approach in terms of trying to build a workforce that want to come back and work in regional places. It’s a very successful model.

“We came back because we like it here; I don't think it was an accident. We saw how rewarding working with underserved populations is. We are frequently reminded of the significant difference the work we do makes to the lives of the people we care for. JCU helped by showing us how valuable that can be.”

Rosh says the growth of regional subspecialty services exemplifies some of the outcomes of the JCU course and its mission in areas of need. “Paediatric cardiology and rheumatology are fairly subspecialised disciplines. Courtney and I are obvious examples disproving the misconception that JCU is solely focused on producing rural GPs,” he says.

NQRTH connects medical students, intern and junior doctors with a network of opportunities and resources designed to create a supportive and clear path to specialist (including general practice) training, and beyond, in our regions. Our network works together to strengthen medical specialist training with the view to build a health workforce prepared to meet the health needs of our regional and rural communities in Cairns, Central West, Mackay, North West, Torres and Cape, and Townsville. NQRTH is facilitated by James Cook University, who partner with hospital and health services and training providers to create a connected career pathway beginning at the medical undergraduate level right through to fellowship. 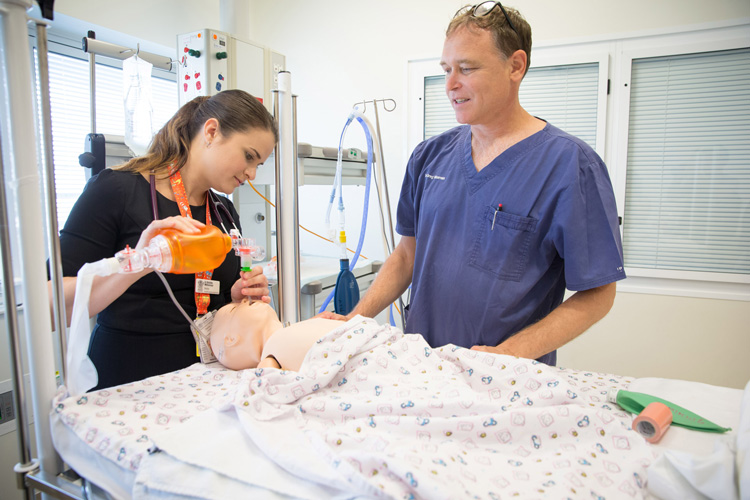 Your pathway into General Paediatrics training