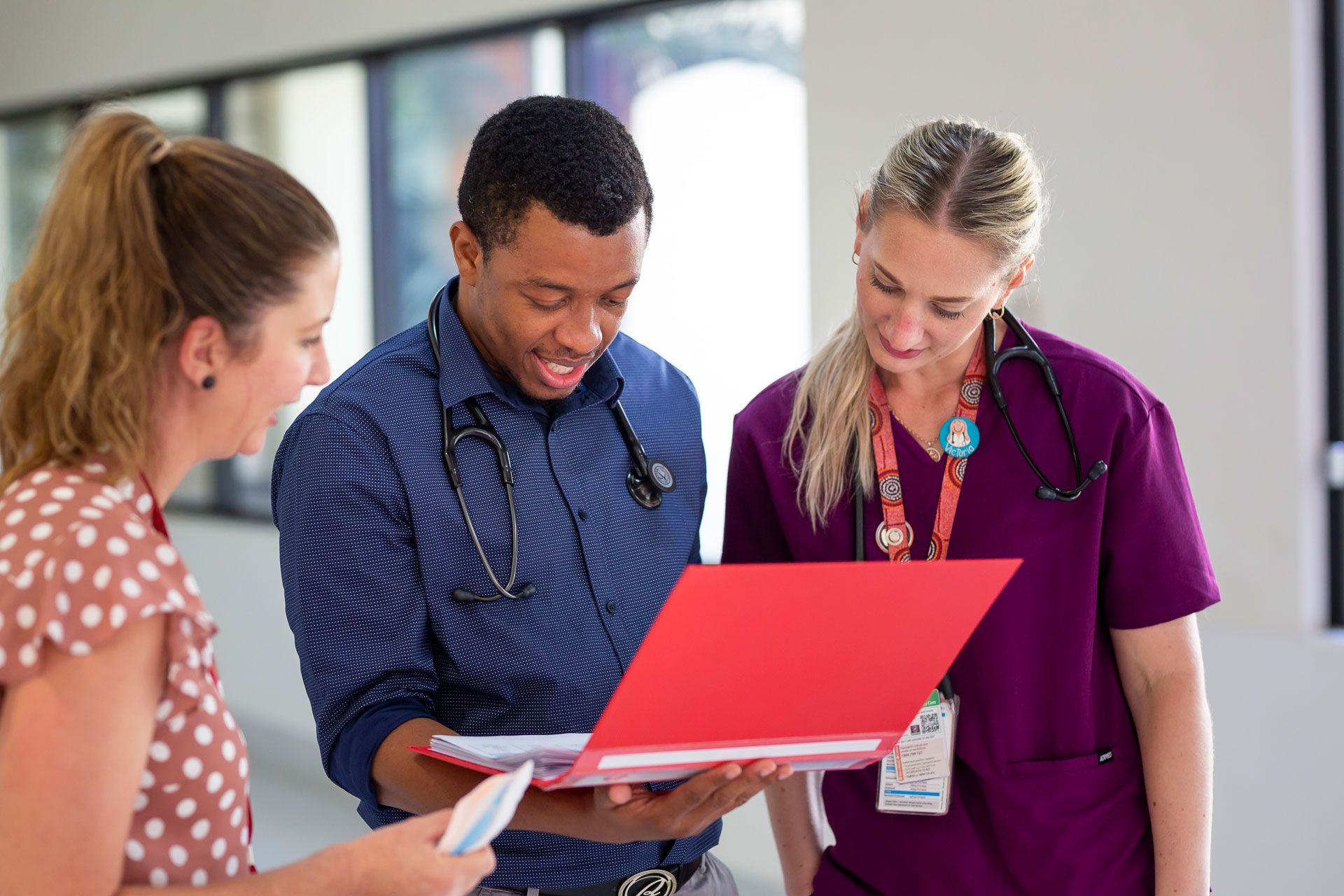 More pages in this section

The large majority of junior doctors have not had an interview since their medical school interviews and find the prospect of a potential interview very daunting! Although interviews can be daunting, they are a great opportunity to show your potential employer your skills, strengths, achievements and why they should hire you! Interviews can be done really well, and can actually be enjoyable if you feel confident and are prepared.

When it comes to medical interview tips, there are different types of interview questions that you can prepare for, with three main styles asked in most interviews – General questions, behavioural questions, and situational questions. There is a good chance you may be asked a clinical question if you are applying for a junior doctor role (E.g. Tell us about a time you managed a patient with chest pain).

The vast majority of job interviews will begin with general interview questions, which is an employer's attempt to get to know you better. It's also your opportunity to show them why they should hire you.

General interview questions give you a perfect opportunity to stand out from the crowd. Some people may get stuck on their job history (E.g. I worked as an intern in 2019 and then an RMO in 2020) whereas this is a great opportunity to showcase your skills, interests and strengths and why they should employ you! For instance, an answer like this one showcases your strengths and skills: “I have been a rotational doctor for two years at the Townsville University Hospital in which I developed a wide range of skills including teamwork, procedural skills, clinical reasoning skills and communication skills. I have performed above average in all rotations as evidenced by my end of term assessments and have received positive feedback from allied health and nursing about my communication skills” etc.

A useful framework for general or open questions like “Tell me about yourself”, “Why did you apply for this job”, “Who are you”, or “Talk me through your CV” is the CAMP framework.

Below are some examples of general interview question examples

Behavioural interview questions are based on the assumption that past behaviour is an indicator of future behaviour. In asking detailed questions about specific tasks you undertook or experiences you had in a real-life setting in prior roles, the employer can ascertain how you may react in similar situations in the role you are interviewing for.

When you hear the words “Tell me about a time when…”, “Describe a time when….”, “Give me an example of….” it is highly likely that you are about to be asked a behavioural question.

Our top medical interview tip when answering these questions always be truthful with your example, and consider an example that will also highlight multiple skills you have (E.g. one example could prove that you have skills in conflict management, negotiation skills, problem-solving and rapport building all in one!)

The CAR or STAR methods are good approaches to answering these questions.

Situation - describe the situation or setting

Task – describe what you did

Action – describe how you did it

Here are some examples of behavioural questions

Tell me about a time when:

Give me an example of a:

Tips for answering behavioural questions in an interview

Always make sure you have described the ‘R’ – You always need to provide a result.

Tips for answering situational questions in an interview

A useful framework for situational questions is the SPIES framework.

Seek Information – E.g. Find out more information about the situation

Initiative – How are you planning on approaching the situation?

Support – Consider what supports are available for the individual in the situation. Think laterally about supports and not just their immediate supervisor – their GP, psychologist, colleagues, union, doctors health line etc

Please outline how you would handle the following situation.

What to take and how to prepare for an interview

Question #1 – Please tell me about yourself (General)

How NOT to answer - Please tell me about yourself? Transcript

Interview (I): Hi doctor. Thank you for your time today. We are going to jump straight to the first interview question. Please tell me a bit about yourself?

Doctor (D): (Few second pause)… Oh.... Umm.... Yeah so I am a doctor in Townsville, and I have done heaps of rotations in different areas and have liked my time in Townsville. I want to do orthopedics, so I want a job in Cairns as I have heard that the ortho bosses are good, and I will be able to get plenty of theatre time.  I love playing sport in my spare time when I'm not at work.

How to answer - Please tell me about yourself? Transcript

Interview (I): Hi doctor. Thank you for your time today. We are going to jump straight to the first interview question. Please tell me a bit about yourself?

Doctor (D): Thank you for the question. I have been a doctor at the Townsville University Hospital for three years, including my internship year. I have thoroughly enjoyed my time as a junior doctor at this hospital. I have found it to be an excellent hospital to solidify my general medical skills. My long term interest is to pursue Orthopedic surgery, and I am very interested in working as a rotational officer at the Cairns Base Hospital as I want to expand my knowledge in this area and hopefully have some rotations in orthopedics.

Clinically I have performed well over the past three years with all of my end of term assessments being satisfactory, and I have received verbal feedback from my supervisors that I performed clinically well.

I have academic interests, and I published a research paper in medical school on 'Wound healing time in children who swim regularly in North Queensland'. I am currently a co-investigator for a project on plastering techniques used in regional Emergency Departments.

I supervise medical students, enjoy teaching and supervising them, and am also on the 'Residents interested in Surgery (RIS) committee.

Outside of work, I enjoy sport, and I think being involved in a team sport is a good hobby and teaches excellent teamwork and leadership skills.

Question #2 - Share an experience where you had a conflict with someone and what you learned. (Behavioural)

How NOT to answer - Tell us when you had a conflict at work with someone and what you did about it? Transcript

I: Please give us an example of a time when you had a conflict with someone and what you learnt?

D: Oh... ummmm.. Ok... Well, I am only a junior doctor, so most of the time, I would just escalate these things to my registrar, and they would deal with it. But I can think of a time where I was on an after-hours shift, and a patient wanted to self-discharge because he was impatient and hadn't had his operation yet. I told him that was the way it always happens, and he will just need to wait for his surgery and that he just wasn't allowed to, and he got really angry at me and started swearing, so I told him he could discharge against medical advice and I let him discharge. I got the paperwork ready, and he signed and was discharged.

How to answer - Tell us when you had a conflict at work with someone and what you did about it? Transcript

I: Please give us an example of a time when you had conflict with someone and what you learnt?

D: Thankfully, conflict is not something that I have encountered regularly, but I would like to give an example of a situation where I experienced conflict with a patient. I was one of two resident doctors who were on an afternoon shift, and one of the nurses phoned to say that a patient was getting increasingly agitated as they wished to leave the ward. I clarified with the nurse the patient's reason for admission, whether they were currently medically stable or unstable, their current length of stay and if the nurse herself felt safe caring for the patient. She responded that the patient was awaiting a wound cleanout surgery that hadn't been done yet, and that she had felt safe until this point, but the patient was getting increasingly angry. I advised her that I would be there right away and asked her if she could phone the hospital security and ask them to be close to the ward but not make themselves too visible to the patient.

The patient was pacing in the hallway, so I introduced myself to him, shook his hand, and told him that I was here to try and help him. I asked them why he was admitted, and he told me that he was awaiting an operation on a hand-wound but had been waiting for three days for the operation, and it hadn't happened yet. The patient was very irritated and told me that he had been not allowed to eat or drink for three days in a row while waiting for the operation, but it still hadn't happened, and it was 6 pm. I explained the operating theatre emergency list and that more urgent cases can often mean that less urgent cases get bumped. I apologized to him that he had been waiting for the procedure for so long, explained the risks of not having the operation and self-discharging and promised him that I would find out more if he stayed on the ward.

I returned to the patient's bedside with the original nurse, bought a sandwich and orange juice with me, and explained that there had been a significant accident outside of town and his surgery would, unfortunately, be postponed. As it turned out, he had just heard about the accident on Facebook and was very sympathetic to those involved and understood why he was delayed. The nurse organized for his dinner to be bought up to the ward. I gave permission to unhook his cannula and allow him to drink and to go outside for an hour or so and fast from midnight again.

The patient was happy about this outcome and appreciative that we communicated with him. Plus, he didn't even smoke! He just told the nurses that he could go outside for a break from the ward as he thought it meant.

The next afternoon I checked on the patient, and he had his surgery done and was back on the ward, and the surgery had gone well. The same nurse was looking after him, and I thanked her and phoned the security guards and thanked them for their efforts as well.