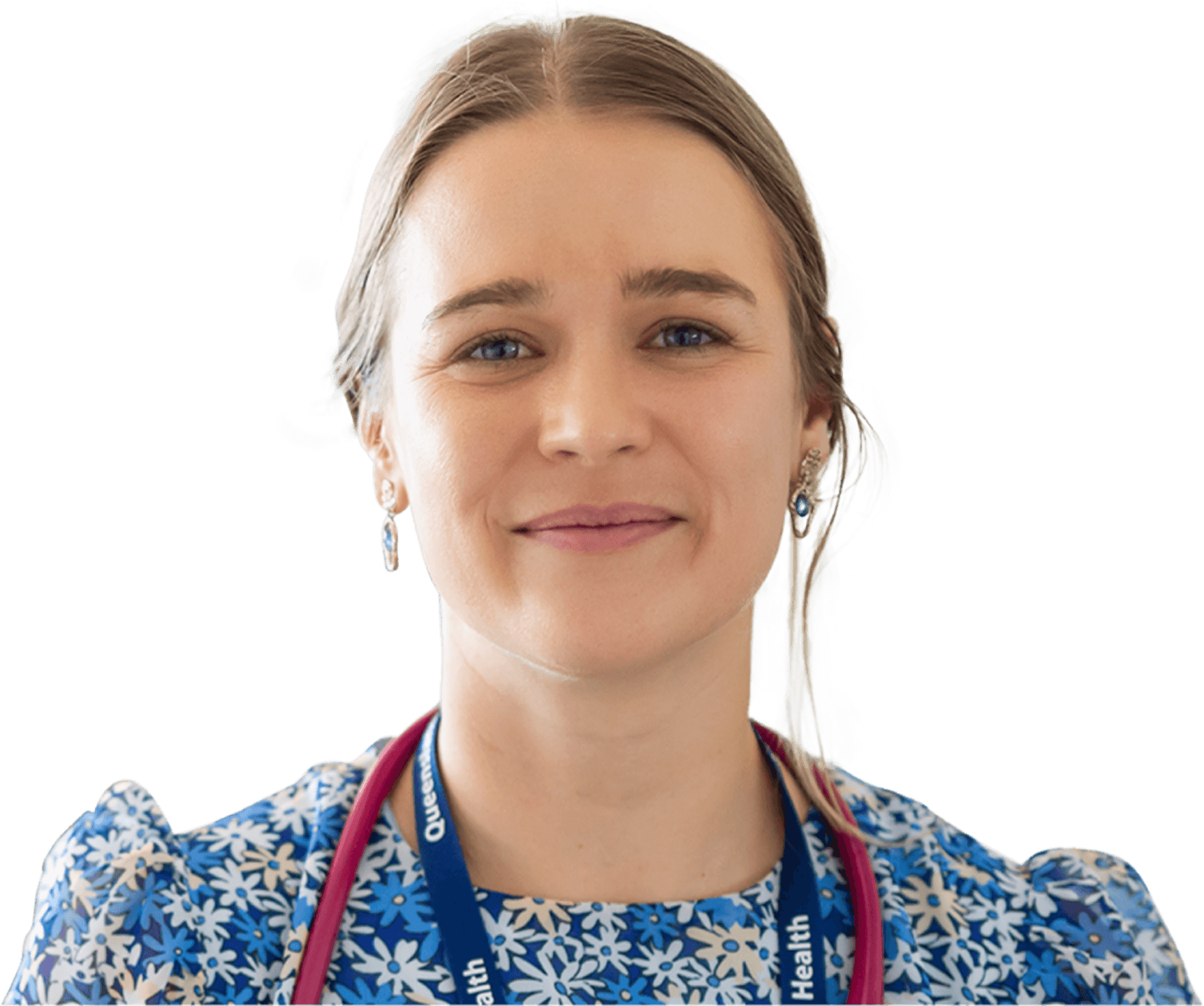 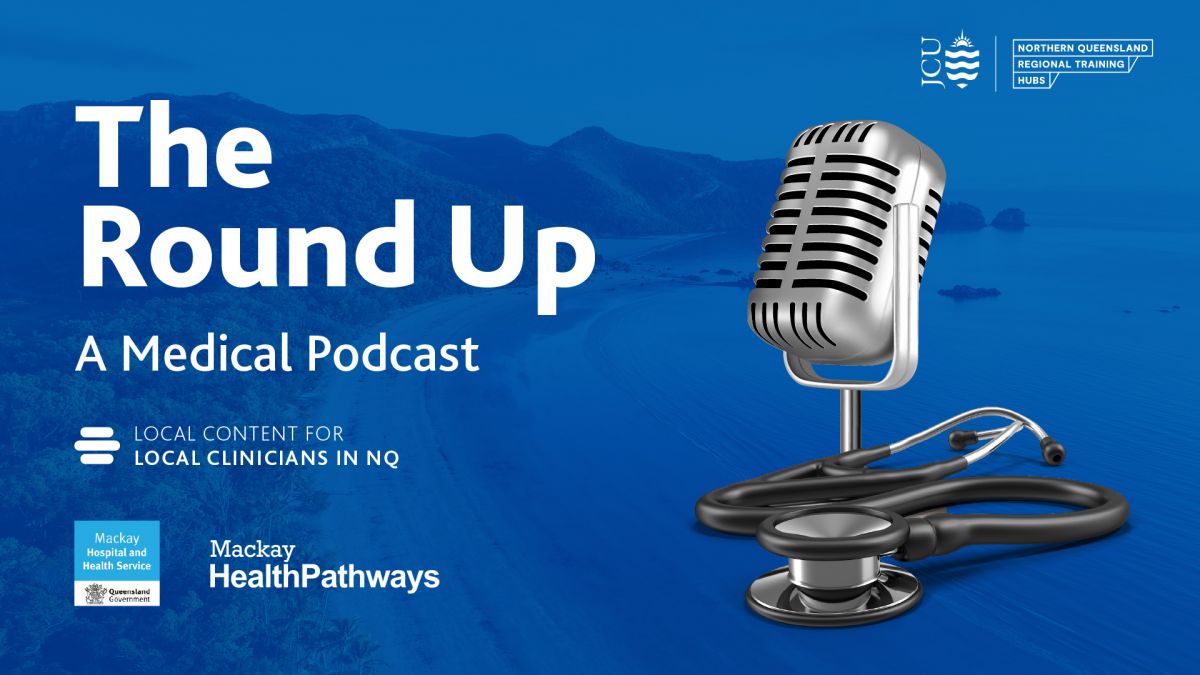 The Round Up: A Medical Podcast

Join Dr Elissa Hatherly for a north Queensland-based medical podcast offering local content for local clinicians. Listeners will hear from passionate and knowledgeable clinicians discussing the approach and management of a diverse range of medical topics significant to our communities.

A network of medical training opportunities

We connect medical students, interns and junior doctors with resources and opportunities to prepare for specialist training and beyond, creating stronger health outcomes in our region. 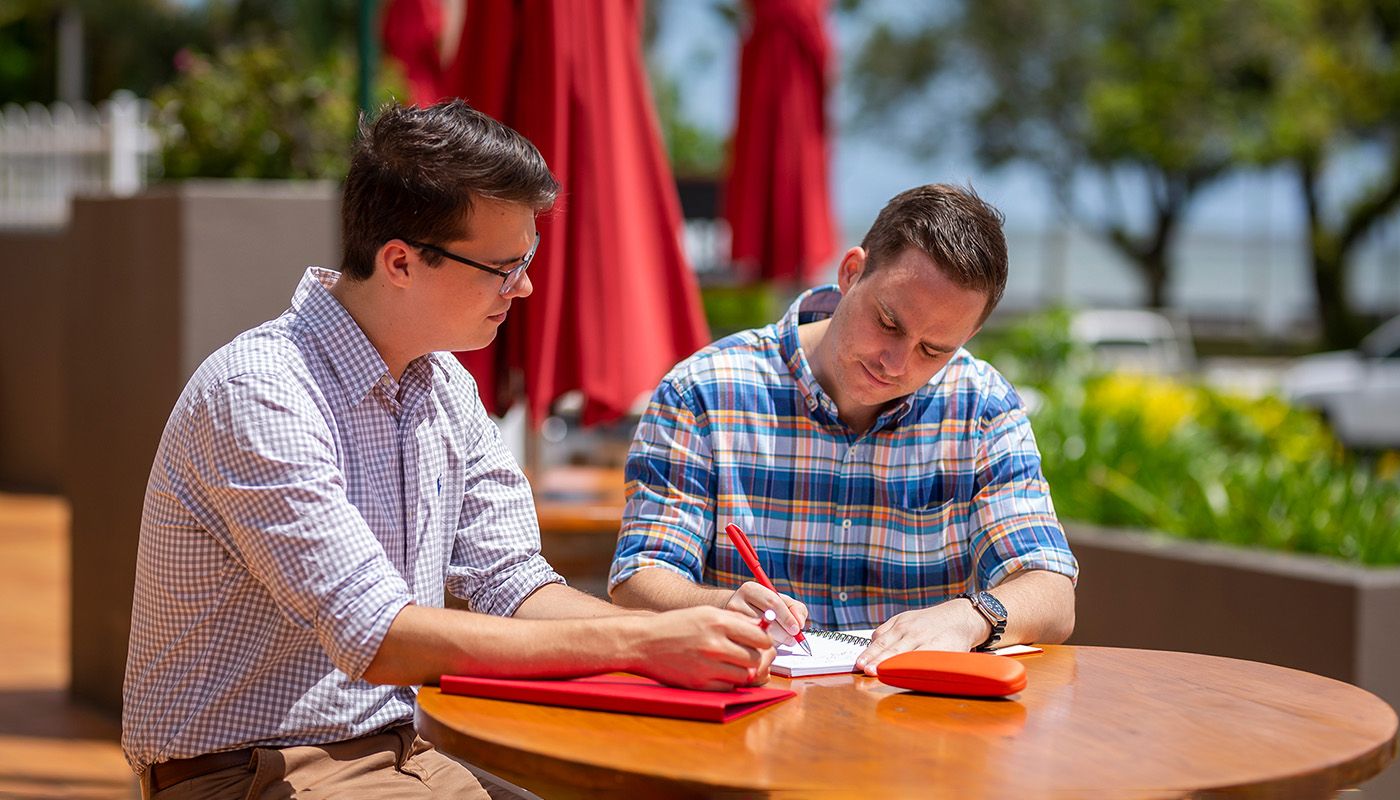 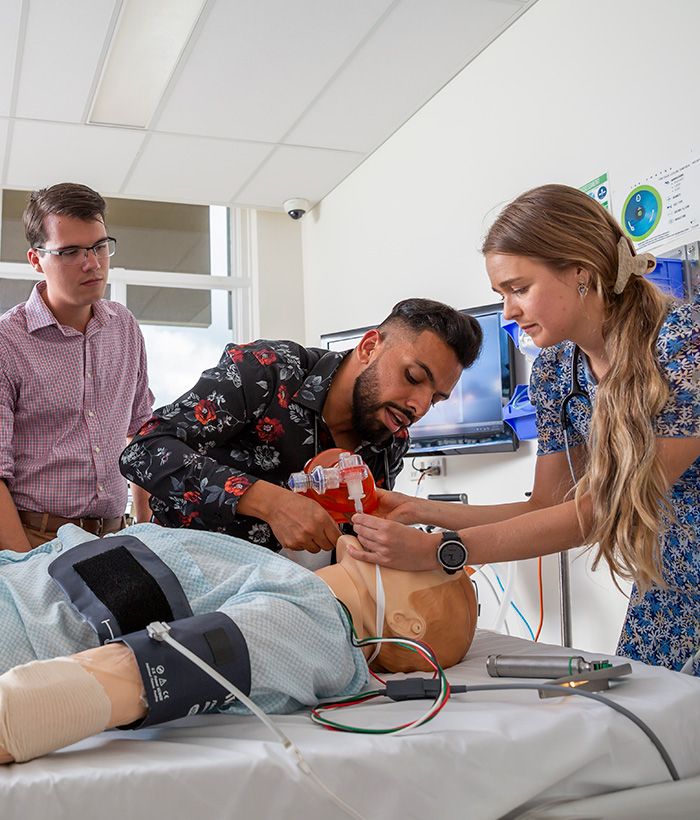 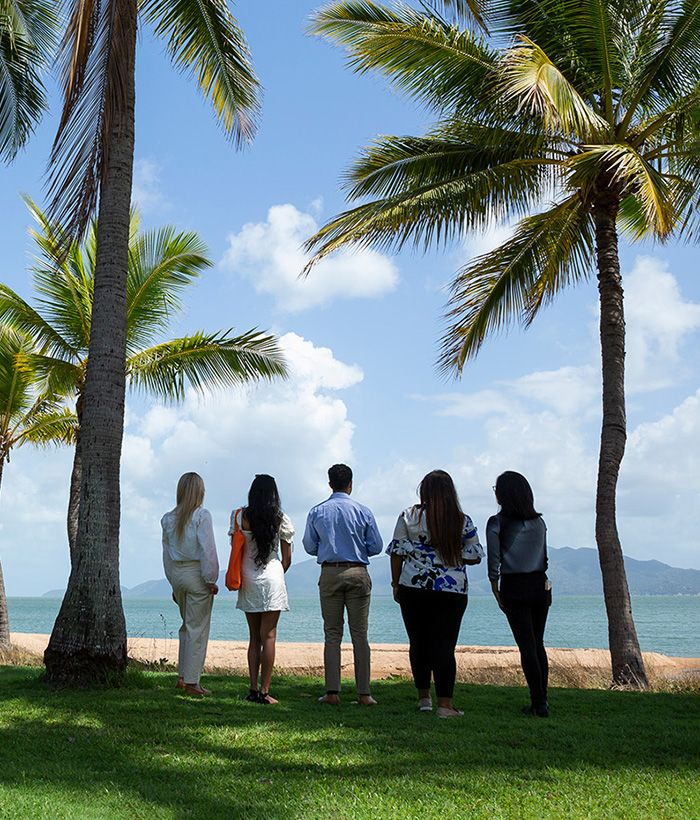 Living and Training in NQ 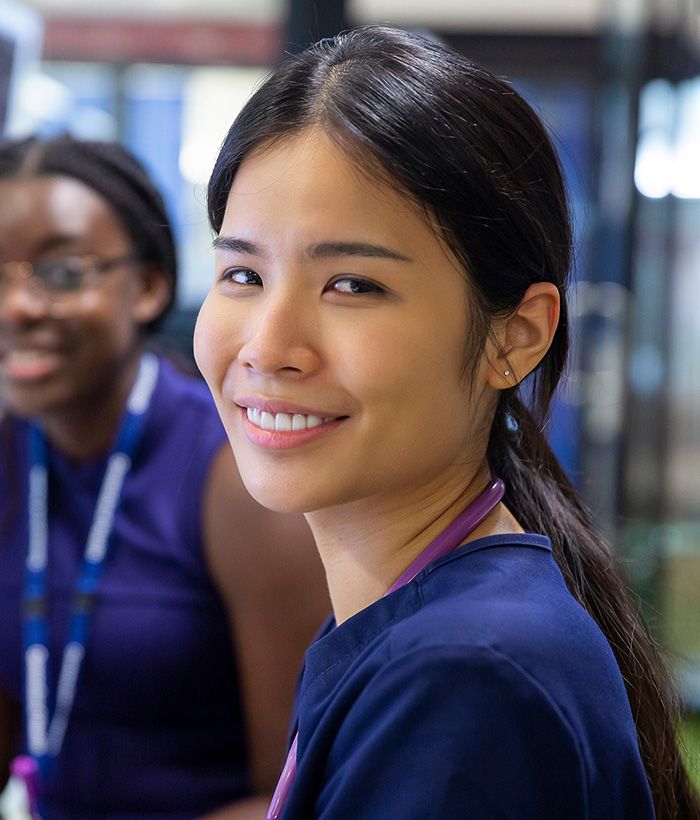 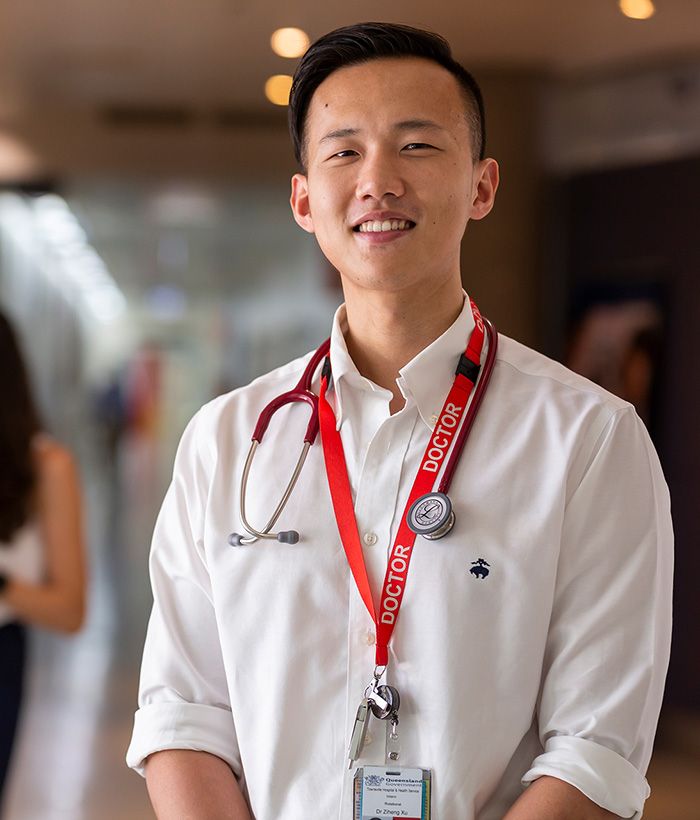 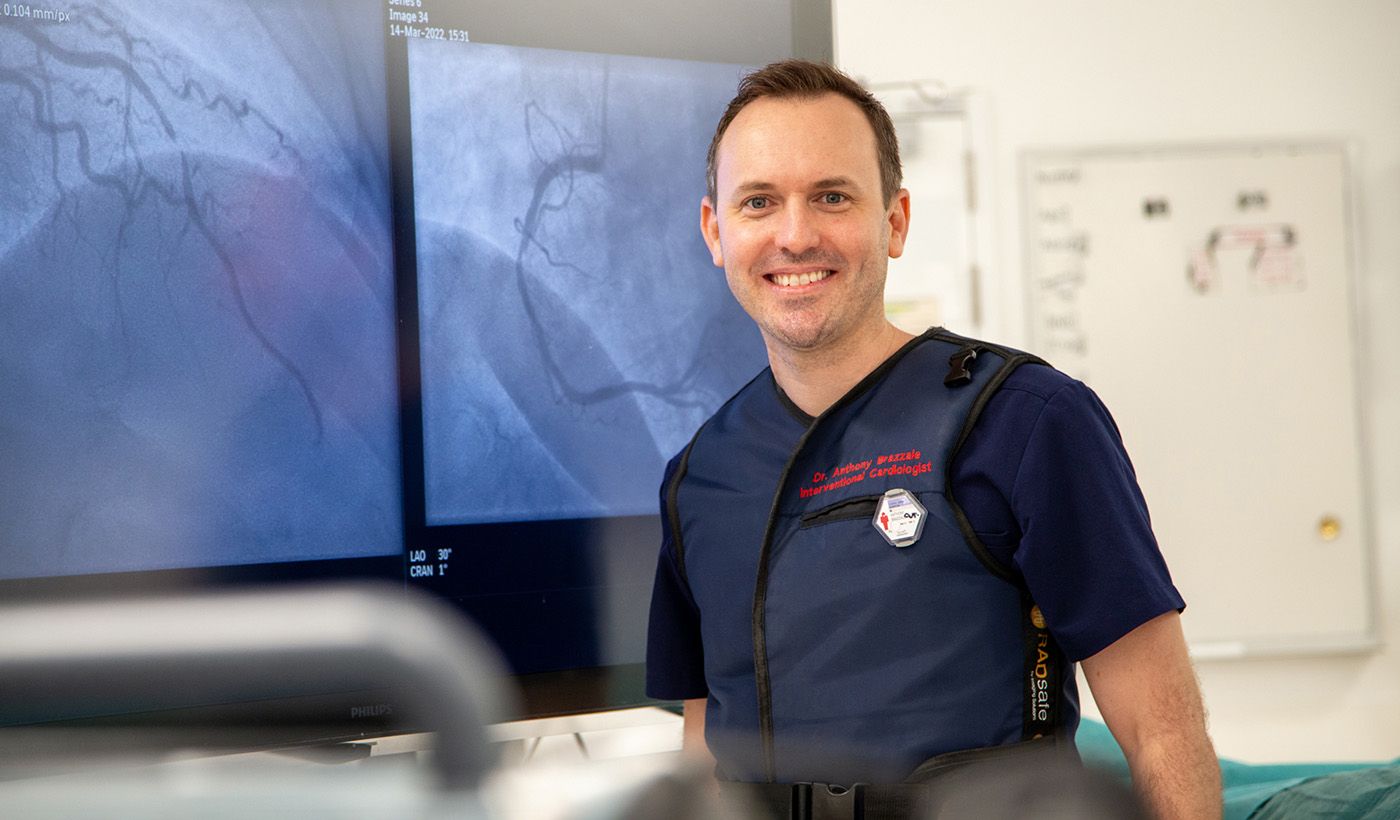 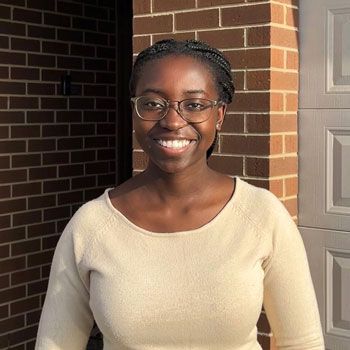 “It was during my time at JCU that I decided I wanted to end up somewhere rural or regional and I thought I would be able to gain a lot of hands-on skills in my junior years at a regional hospital like Mackay Base Hospital. It’s been great working with other doctors who are as passionate about rural health and the people it serves.” 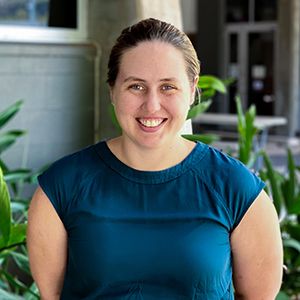 "As a consultant in Pain Medicine, I have excellent work-life balance. Townsville is a great place to raise a family and there's so much on your doorstep here. It's just an easy life.” Read More 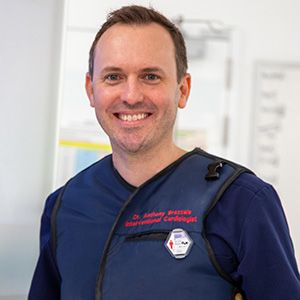 “We have advanced trainees who come from Brisbane and want to come back here now as consultants. They tell us this is one of the best training centres in Australia. The opportunities you get up here, you’ll get nowhere else.” Read More

Keep up to date with our latest news & events! 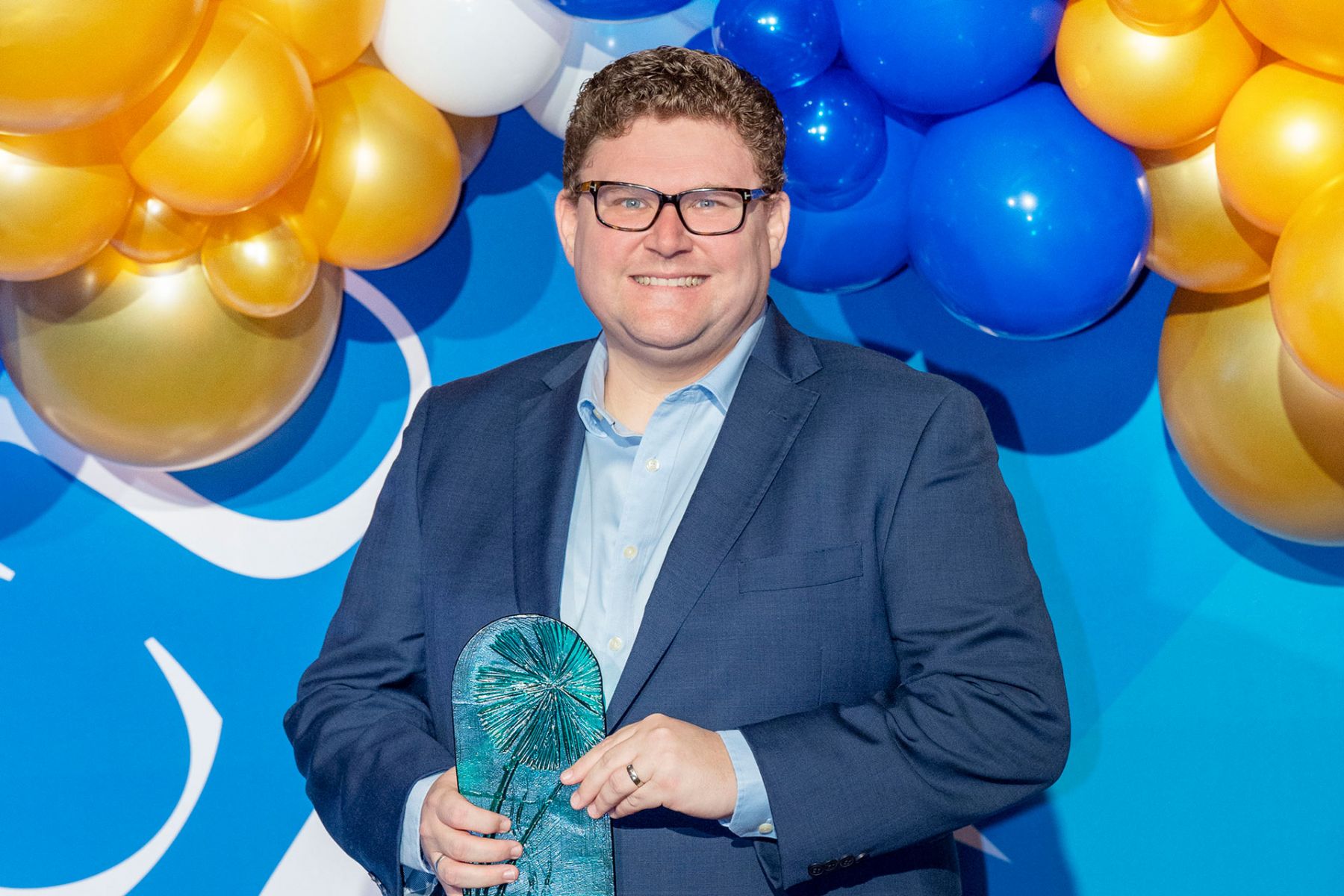 Townsville nephrologist Professor Andrew Mallett is internationally recognised for his work in identifying new approaches, understanding and treatments for genetic kidney disease. The Bowen-raised James Cook University graduate returned to North Queensland in late 2020 as director of clinical research at Townsville Hospital and Health Service, becoming the first JCU Medicine graduate to be appointed professor of medicine. Prof Mallett leads the KidGen Collaborative, a national clinical and research consortium championing novel diagnostic and research pathways for patients and families affected by inherited kidney disorders. His multidisciplinary renal genetics clinic model operates in 18 locations across Australia. “Kidney health is a national quandary,” Prof Mallett says. “It's a massive need. At a national level today, there are something like 1.7 million Australians affected by kidney disease, and about a million of them don't even know it. Kidney disease disproportionately affects those in Northern Australia and in rural and remote areas. Wherever you practise, you're contributing to the greater good, but to do it here where there's clearly such need, I think is really important.” Prof Mallett is one of a handful of nephrologists in the country who specialise in genetic forms of kidney disease. “When I was doing my renal advanced training in 2011 to 2013, there was no one in Australia in that subspecialty area,” he says. After completing a Churchill Fellowship in the United Kingdom, France and North America, he focused his career on heritable forms of kidney disease. “It's an area in which there's a great clinical and research connection,” he says. “By understanding how changes in our genes may cause or relate to the development of kidney disease, we've got a really good chance of understanding how these diseases individually work, and that may lead to better treatments in the future. “At the same time, there's a great personal connection to patients, because many are seeking a diagnosis. What is the cause of their kidney disease? What is the type of their kidney disease? Both when I was a renal advanced trainee and before that as a more junior physician trainee and medical student, most of the time we didn't have good answers. Everyone seemed so comfortable with that, and I really wasn't. “A lot of my research is focused on the development and application of new genomic technologies to help patients in a clinical context to get those answers.  We now understand that at scale, and it's available in clinics right around the county.” A key achievement has been the Medicare listing of genomic testing of patients with heritable forms of kidney disease as of July 1 this year. “It’s something that was aspirational and unthinkable five years ago,” he says. “It's been great to contribute in a research way to realising things like that at the same time as doing the research that underpins driving major clinical and policy change.” Now a teacher of JCU medical students, Prof Mallett started at JCU in 2001 as a 17-year-old fresh from boarding school in Brisbane and a holiday job as an assistant nurse at Bowen Hospital. “I worked as an AIN (Assistant in Nursing) at Bowen Hospital practically every weekend from before I got into medical school and then for the first five years I was at medical school,” Prof Mallett says. 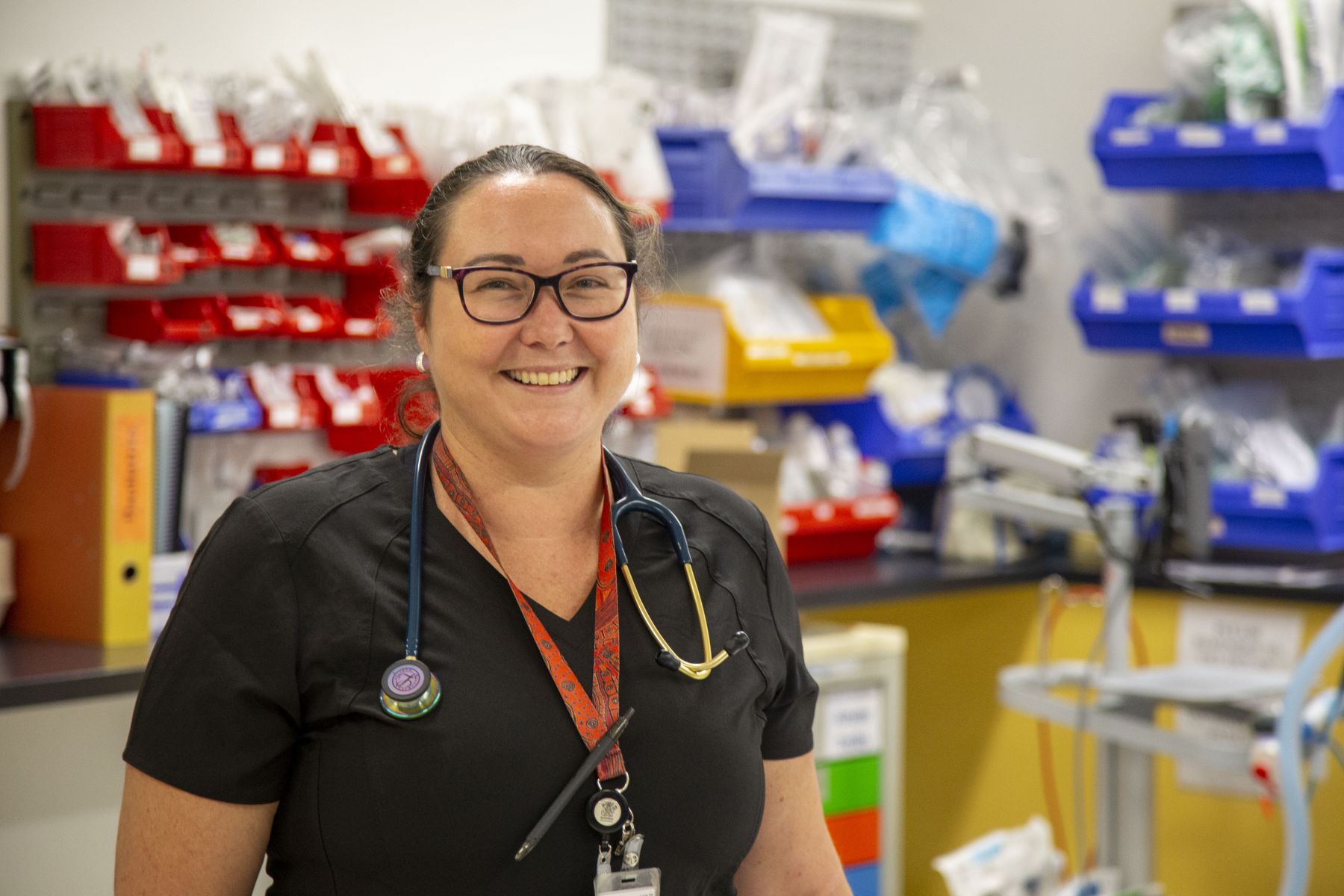 North Queensland born-and-raised JCU alumnus, Dr Tatum Bond, has become Queensland’s first Indigenous Fellow of the Australasian College for Emergency Medicine (FACEM). The achievement is the culmination of six years of specialist training in Rockhampton and Cairns, combined with a life-long passion to help Close the Gap in Indigenous health outcomes and increase the representation of Aboriginal and Torres Strait Islander doctors in medical specialities.. Part of the Ngajanji people from the southern Atherton Tablelands, Dr Bond grew up in the Central Queensland town of Gladstone. Even as a child, she looked destined to be the first in her family to pursue a medical career. “I've always been fascinated by how the human body works. I was a big fan of those biology children's books and models,” Dr Bond says. “My mother tells a story of when I was about four or five, I was meant to be asleep but I was watching the TV from around the side of the wall. It was a 60 Minutes program about a baby who was born with their intestines on the outside of the body, and apparently, it was from then on that I’d say ‘I want to do medicine’.” Dr Bond says it was important for her to be close to family, so choosing to study medicine at JCU in Townsville was the logical choice. It was a decision that would hone her medical interests and her path into specialisation. “I'd never travelled outside of Queensland. So having something ‘close-ish’ to home was important to me. I really enjoyed JCU and thought it was a very well-run medical school. “The rural placements were where I had the most fun and learned the most. I went to Cooktown in my second year and absolutely loved it. I went to Thursday Island in my sixth year and was just really accepted as part of the team. These experiences led me down the rural generalist pathway after graduating, before ‘jumping ship’ to ED in 2014,” Dr Bond says. Now, as an ACEM Fellow, Dr Bond has returned to Cairns and works as an Emergency Consultant, dividing her week between Cairns Hospital and the Royal Flying Doctor Service. 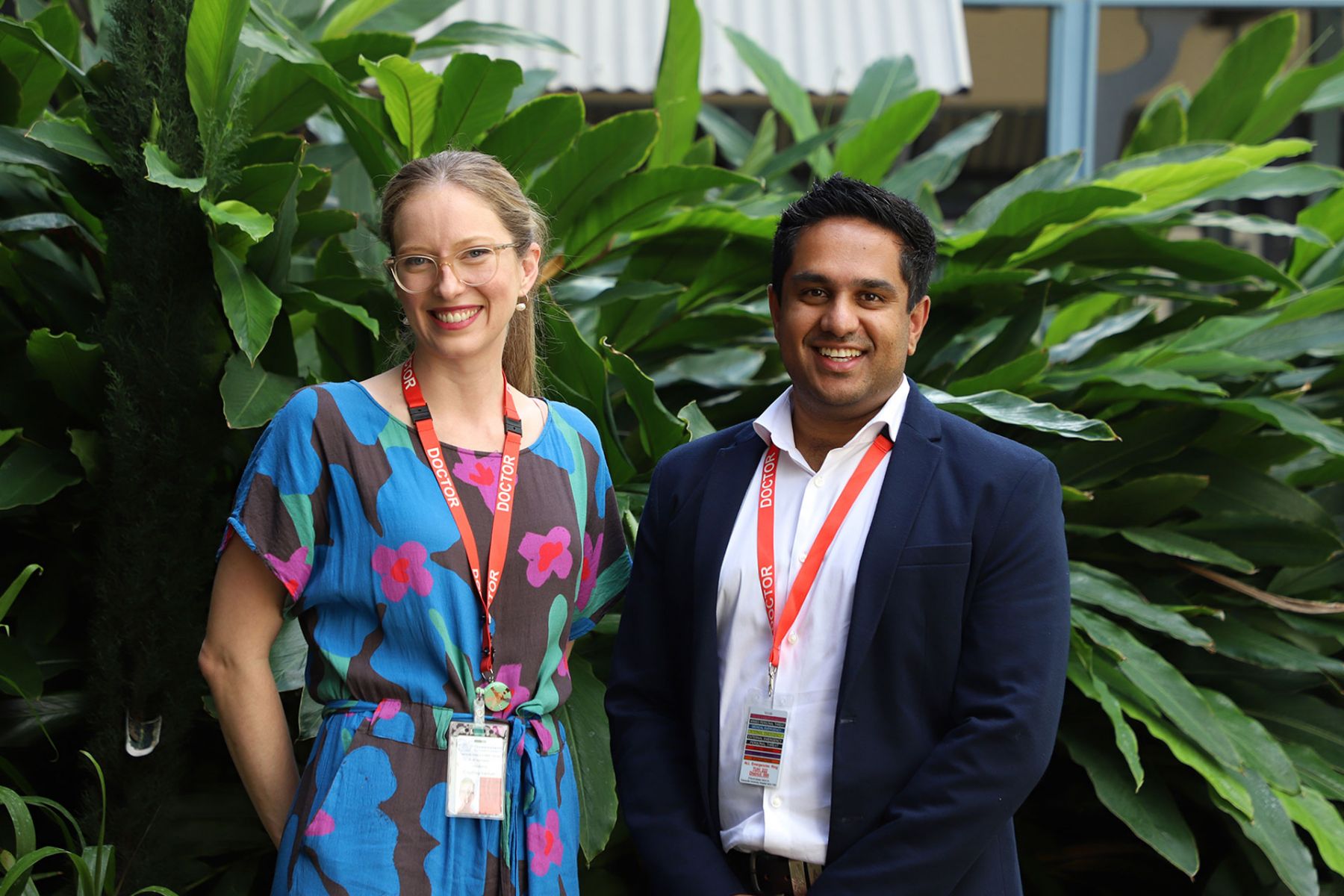 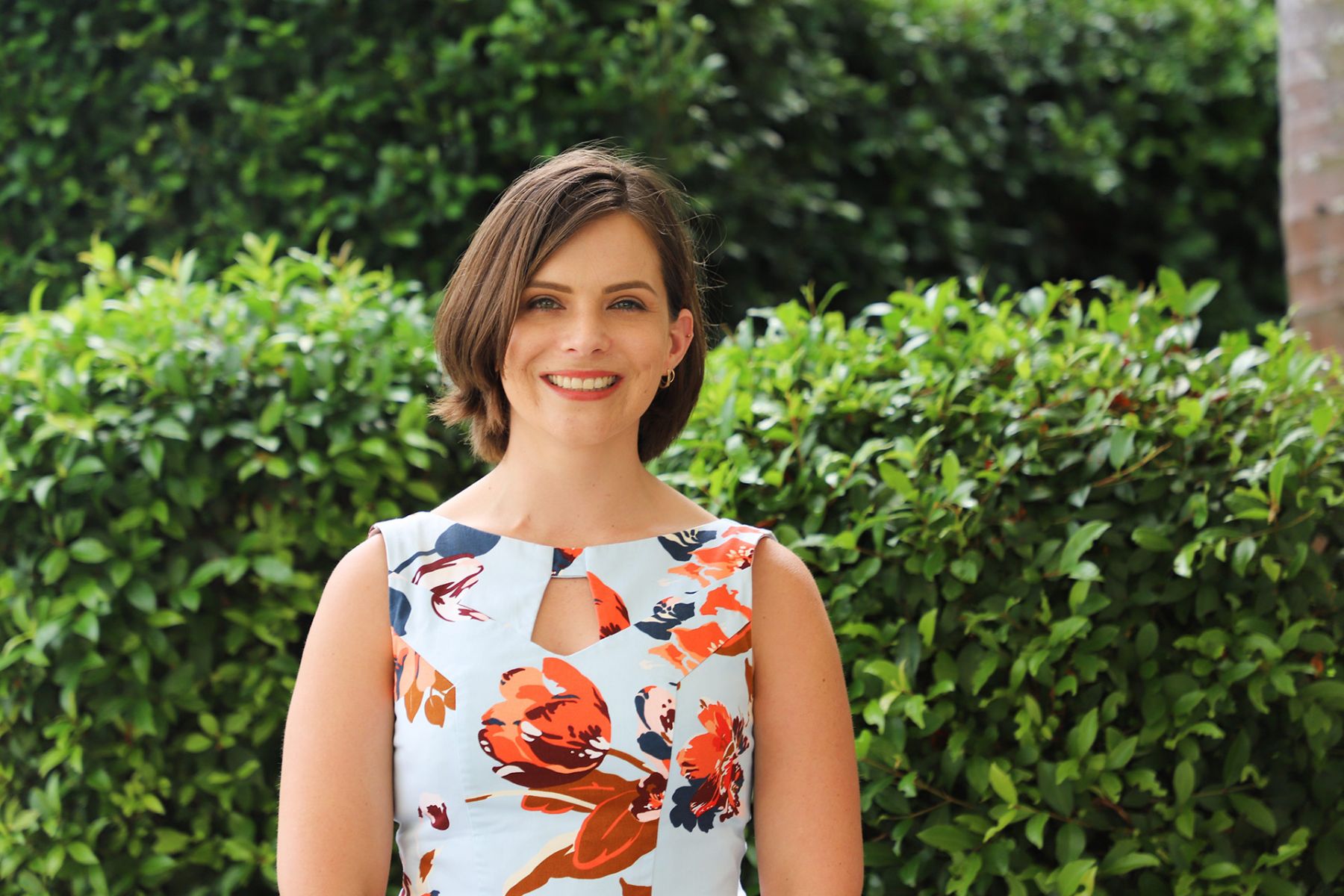 Seeing hospital through a patient’s lens

Dr Alisha Thomson has seen the health system from doctor, patient and management perspectives during her five years of treatment for ovarian cancer. Dr Thomson was a 27-year-old James Cook University graduate in her second year of medical practice when she was diagnosed with stage four ovarian cancer. Discovering a new passion amid the demands of treatment ultimately led her to change her medical specialty training path.  “I was a psychiatry house officer at that point. After a significant period of sick leave, I was given the opportunity to work as a medical education registrar through a return-to-work program,” she said. “I went back to psych and then did some time as the medical admin reg and just really enjoyed the systems thinking and looking at the bigger picture. I loved psychiatry, and it took me years to finally switch, because it's hard to change lanes.” Now a medical administration registrar, Dr Thomson has endured four rounds of chemotherapy as well as radiation, surgery, and therapies such as monoclonal antibodies and breast cancer drugs. Her experiences as a cancer patient continue to inform her leadership role in improving systems and processes at Townsville Hospital and Health Service (THHS) and putting patients’ needs at the centre of decision making.