Interning in Mackay, the ‘gold nugget’ of Queensland 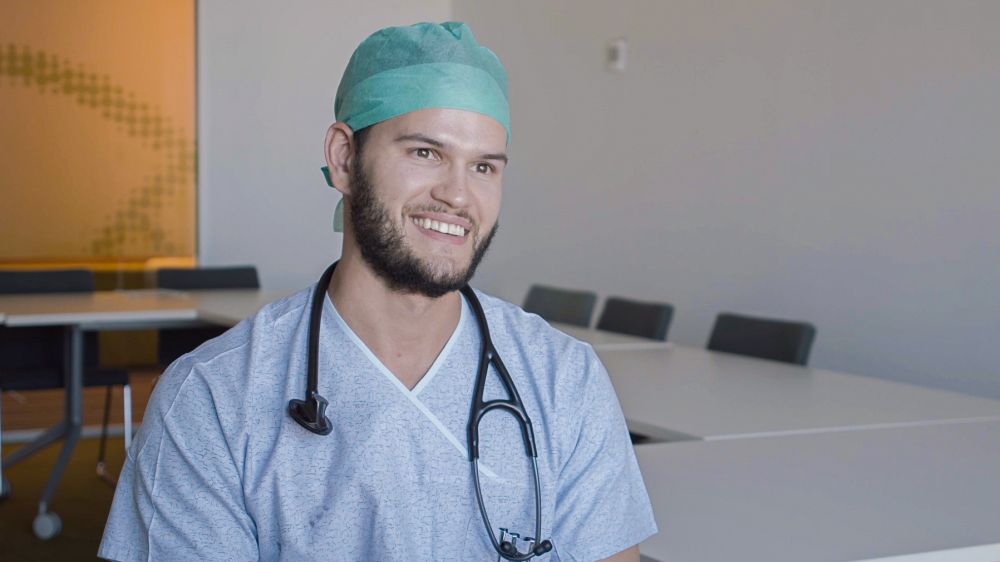 When it came to applying for intern medical positions, Shawn Steckle and his partner knew they’d have to cast the net far and wide. As international students looking to be placed as a couple, they realised going regional would be the best option.

“I wanted to play it safe and get a spot early with Queensland Health rather than pursue the CMR route. So we flew up to Cairns and made our way down the coast back down to Brisbane, attending all the hospital intern open days along the way,” Dr Steckle said.

Having never been to the region, the pair were delighted with what they found.

“We were very, very impressed with Cairns, Townsville, and Mackay. They were our top picks, we would have been happy to go with any of the three.”

But it was Mackay that would ultimately grab them.

“We’d never been to Mackay before we showed up at the hospital and we’d had no idea that the facilities were so new and so nice. We didn’t have any expectations and we were blown away when we toured the hospital. We got a great impression of the place straight away.”

It wasn’t just the facilities that won them over.

“The medical workforce people and the medical education unit staff were great. They all seemed very keen to recruit couples who were really interested in being there.”

While weighing up their options they also took some time to look around the northern Queensland city and found they liked what they saw. Their decision to put Mackay as their number one choice was quickly validated after hearing positive reports from a former medical school friend who was already working there.

“My friend was an anaesthetics registrar there. When he found out we had been offered Mackay he congratulated us and told me I had no idea how good I would have it in Mackay. He described Mackay was the gold nugget of Queensland,” Dr Steckle said.

“He told me that it’s the sort of place that offered lots of opportunities, and if you were prepared to work hard you could advance yourself very fast.”

And from the start, Dr Steckle and his partner have had great support from the hospital.

“The medical education unit is really, really good. It is exceptional and we are very, very lucky to have them. The team genuinely cares about us doing well and being happy with the way things run.  They try extremely hard and put in a big effort to make things as good as they can for us.

“I can’t say enough good things about them. They were exceedingly accommodating during the process of moving to Mackay, so they helped us out with moving costs and accommodation. It made all of us interns feel very supported coming here. It was such a nice welcome to the community.”

Dr Steckle said the hospital helped interns choose their rotations for the year, and both he and his partner got every rotation they wanted. This was quite a different experience to what many of their friends had with larger metropolitan hospitals.

“I don’t know of any of my friends in those hospitals who got everything they wanted, while we both did. It’s such a big difference, getting what you want for your rotations early on, rather than having to wait for your Senior House Officer year.”

Another positive has been the easy access to senior doctors, registrars, and consultants, which he has found to be both approachable and supportive.

“You also get trusted with more procedural things. In the ED I got taught how to do ultrasound-guided cannulation so I’m pretty competent with that. It’s a skill I’ve used numerous times. I know friends in big hospitals who had trouble getting to learn that or being able to use it.”

Reflecting on his internship, Dr Steckle said it’s been a positive learning experience, which has allowed him to grow both in skill and confidence. So much so that he and his partner are planning to stay in the north for some time yet.

“There are days when you go home after a shift and think ‘ok today I took a step forward’. These things happened and they went really well. You can feel that you took that step and you helped somebody.”