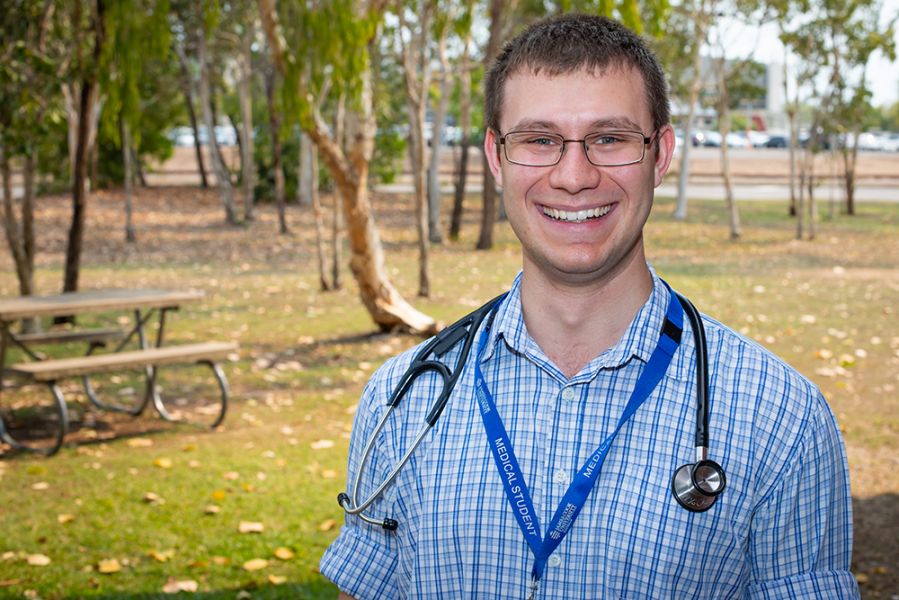 Within a quarter of an hour of arriving at his extended 35-week rural placement in Longreach, Matthew Riggs, was sitting down for a roast dinner with newfound friends.

But this is outback Queensland, so it was dinner with a difference.

“I arrived in Longreach on a Sunday at 4pm. I was just getting some stuff in from the car when two of the students came out and invited me to join them for a roast dinner at the NUM’s (nurse unit manager) house. I said, `Sure, I’ll come along’.”

“So fifteen minutes after arriving, I was at the NUM’s house, having a beer and roast wild boar that he had shot himself. ‘’

“So that was my introduction to Longreach.”

“It actually turned into a recurring social event. Every few weeks after that, he would roast up a different part of the boar and would come over to our house for dinner with all the students.”

However, there was more than just beer and boar on the social calendar in Longreach.

Bike riding, tennis, camping, water-skiing, swimming, horse racing, shows, balls, nights playing pool at the pub – there was always something happening in the town.  Matthew also connected with the community and got involved in the local Rotary club with fundraising activities and events.

While life in a country town is a new experience for some, it was more like a homecoming for Matthew.

“We grew up in really small towns of fewer than 300 people and we felt most at home in rural areas.”

While most people think of education only happening in a classroom, Matthew’s school-teacher parents had other ideas.

“They believed very strongly when we were younger that we needed to get some life experiences. One of the ways they went about that was making sure we travelled around Australia. We didn’t do it in one trip, we did it in a lot of smaller trips.”

To complement the family’s nomadic lifestyle, Matthew and his three siblings were schooled at home through the Brisbane School of Distance Education.

“Because we were travelling so often, the distance education model worked really well, due to the flexibility in the way the curriculum was delivered.”

In second year, he elected to do two rural placements instead of one.

His first experience was four weeks in the mining town of Blackwater in Central Queensland and then later in the year, he received JCU’s Lynn Kratcha Memorial Rural Bursary and travelled to a small town in North Dakota in the US.

In fourth year, he spent six weeks in Bowen and in fifth year he had three months out in Mount Isa.

In his final year, Matthew’s love for rural medicine was now firmly embedded, but he wanted to affirm that the rural path was the right road to travel.

“It was interesting in Year 5 – I had a lot more exposure to those more specialised areas of medicine like paediatrics, obstetrics and gynaecology and surgery.

“It made me think. Do I want to want to go down the Rural Generalist pathway, where I am a GP and then develop an advanced skill in one of these areas, or do I want to become a specialist in one of those areas rather than a GP?

“I thought the best way to find out was do a really long placement in a rural area and properly experience what it is like to be a member of a rural medical team. So I decided to do the 35-week placement in Longreach.”

Matthew is now sure he made the right choice.

“I have come away from the placement thinking Rural Generalism is definitely what I want to do.”

“I remember starting one day by assisting with an elective caesarean, then I saw our inpatients on the ward round, and later saw patients in ED and inserted cannulas in the medical imaging department. One of my patients that day was a child, who I had seen a couple of times previously, and I enjoyed hearing about his progress and that of his family since our last consultation.

And he isn’t the only Riggs sibling hoping for a rural career in medicine.

His sister, Catherine, is in her final years at JCU and has had placements in Sarina and Innisfail and Bowen. Because of her brother’s positive experiences, she has also chosen to do her ED elective in Longreach.

Matthew is now on the Rural Generalist Pathway and completing his intern year at The Townsville Hospital (2020).

Looking to the future, Matthew is flexible about where his rural career takes him.

“Because we have travelled around a lot, I would be comfortable anywhere.  Queensland is home, though, so it will be somewhere here. Really, it is wherever life takes me.  Longreach was an excellent experience and I would definitely consider going back there again.”